Good habits, bad habits: Eating popcorn on autopilot
We often snack on autopilot, even when we're not really hungry. With an impressive popcorn experiment, scientists showed how we can break bad habits with small changes in everyday life.
16 September, 2021 by

This text is based on an excerpt from the study "Prevention in Transition" that can be downloaded from our website.

Changes in our daily lives can lead to losing habits. On the one hand, this can be a loss if they are behaviours that one would ideally like to continue, such as sports activity. However, the loss of habits can also be beneficial if one questions and adapts bad habits. At the same time, changes in everyday life are a gateway for new habits - both good and bad. Changes in the environment can also be an opportunity in this respect.

The effects of such a disruption of habits are shown impressively in a study with popcorn. Participants were watching a film in a cinema and were allowed to eat as much popcorn as they liked. Half of the participants were given fresh popcorn, the other half were given week-old popcorn that had gone stale. Those participants who were in the habit of eating popcorn at the pictures (so had trained their ‘autopilot’ to do so), ate the same amount of popcorn, whether fresh or stale. They ‘stuffed their faces’ with popcorn without thinking or complaining. It was different with those who were not able to resort to their ‘autopilot’: either because they were not regular cinema-goers, or because automated habits were made more difficult, for example, by showing the film in an unusual environment (a meeting room instead of a cinema), or by making them eat with their left hand (if they were right-handed). In the absence of being able to use the ‘autopilot’, more popcorn was eaten if it was tasty. The stale popcorn, however, was more likely to be left untouched. Meaning: those participants unable to resort to their routines or ‘autopilot’ adapted their behaviour to the quality of the popcorn. Challenging bad habits

Many of us are familiar with the situation of having eaten too much of a snack despite not being hungry and the snack not being all that tasty. It would be useful at this point to pause briefly and to reflect on whether one is actually hungry and on what the snack tastes like. Changes in everyday life that override the autopilot can contribute to raise that attention and to question bad habits. It is of course possible to bring about this change intentionally, for example by eating with chopsticks instead of a fork (until that in turn has become automated)

In a familiar environment, for instance, campaigns promoting a healthy diet often fail in the case of trained habits. Even if one would quite like to eat a little more healthily, it often does not turn out that way. But if one’s own everyday life is undergoing significant change, these habits also become less fixed. Thus, people who had just moved house and therefore had to form new habits anyway were more likely to be influenced by a campaign for more environmentally friendly behaviour such as reusing shopping bags or reducing the temperature of their heating.This study mentions a time-window of approximately three months during which habits can be formed and thus during which intervention campaigns are more likely to have an effect. To achieve a stronger effect, however, the intervention should begin before the life-changing event and be tailored to the individual.

Overall, it may be said that changes make us more malleable, to ourselves and to external influences. It would be desirable, therefore, to make use of this malleability to adopt good habits and give up bad ones, while also displaying enough stability to maintain good habits and fend off bad ones. The key word in this context is resilience, understood as the ability not only to remain steadfast in the
face of change and crises, but to emerge even stronger from them. 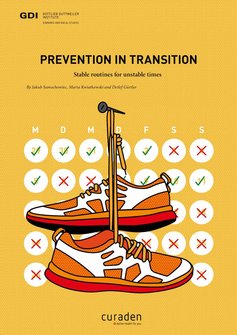