Clean meat or zombie meat?
Lab grown meat or in vitro meat is on the rise and promises the protection of animal welfare as well as lower energy costs. But what about customer acceptance? The GDI's "European Food Trends Report 2021" provides the answers.
13 January, 2022 by

The following text is an excerpt from the "European Food Trends Report 2021", that can be ordered on our website.

Market research regarding the acceptance of meat and fish from cell-based agriculture has arrived at different results. In September 2020 an Australian study involving Generation Z found that the majority of participants (72 percent) were not willing to accept lab-grown meat. Nonetheless, many consider this a sensible idea as it is necessary to adopt more sustainable food sources and improve animal welfare. When presented with a choice between different alternatives to conventional meat, one third of participants reject cultivated meat and edible insects, although they accept plantbased substitute products, perceiving them as being more natural.

In the same month new studies pointed to a growing acceptance of meatless food in Germany and France. While the share of vegetarians in France is still relatively low, less than 50 percent of people in Germany are dedicated eaters of meat. The number of flexitarians is growing, with concern for animal welfare being given as the most common reason for doing without meat. There is a sizeable market potential for lab-grown meat in both countries, with German consumers being significantly more open to this idea than the French. 44 percent of French and 58 percent of German participants stated that they were willing to try cultured meat, and 37 percent of French and 56 percent of German consumers claimed to be willing to also buy it themselves. One striking aspect is that the acceptance of cell-based meat is significantly higher among workers employed in agriculture and meat processing. This suggests that persons who are closest to traditional methods of meat production are the most likely to prefer alternatives.

Fast food as a propagator
A key factor for the acceptance of products from cellular agriculture will be sales via the
restaurant industry. In particular the large fast food chains are important propagators here
and for many consumers act as the initial point of contact with new protein substitutes. The
same effect has already been observed in the case of plant-based meat. Fast-food giants such as Burger King, McDonald’s or Subway have increasingly stepped up their range of plant based products in recent years, thereby making them accessible to a wider audience. If these chains now also offer cell-based meat – and they are set to do so – such products will automatically find their way into the stomachs of a larger target group, thus becoming mainstream sooner or later. 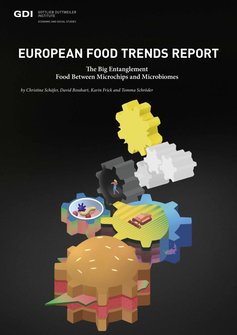