Augmented Reality Communication
Pokémon Go or Google Glasses - people in the same room are experiencing different realities, thanks to Augmented Reality. Additional information enriches their environment. What happens next? The GDI study "Digital Corporate Publishing" explores this question.
11 March, 2020 by

This text is based on an extract from the GDI study “Digital Corporate Publishing”.

Anyone standing next to me sees the same thing as I do. That was the case until not long ago. With Augmented Reality (AR)--the enrichment of the natural environment with digital information--this is no longer the case. On smartphone displays, our environment merges before our eyes with a "reality" that looks different to everyone. So we could be physically in the same room with fellow human beings, but no longer in the same place. And not see the same thing.

This was evident in the summer of 2016, when crowds of people suddenly began to form in unusual places because there were rare Pokémon Go characters to be captured in the game world. After Google Glasses failed to expand their technology on reality, AR was suddenly everywhere via smartphone app from Japanese company, Nintendo. Within a few weeks, even non-users of the app became used to the fact that in some places, people were staring at their smartphones and experiencing a world of their own.

The experts interviewed by the GDI in the context of the study "Digital Corporate Publishing" believe augmented reality will most likely become established on the smartphone among the general population. 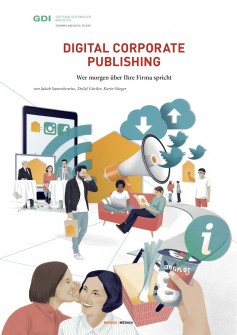